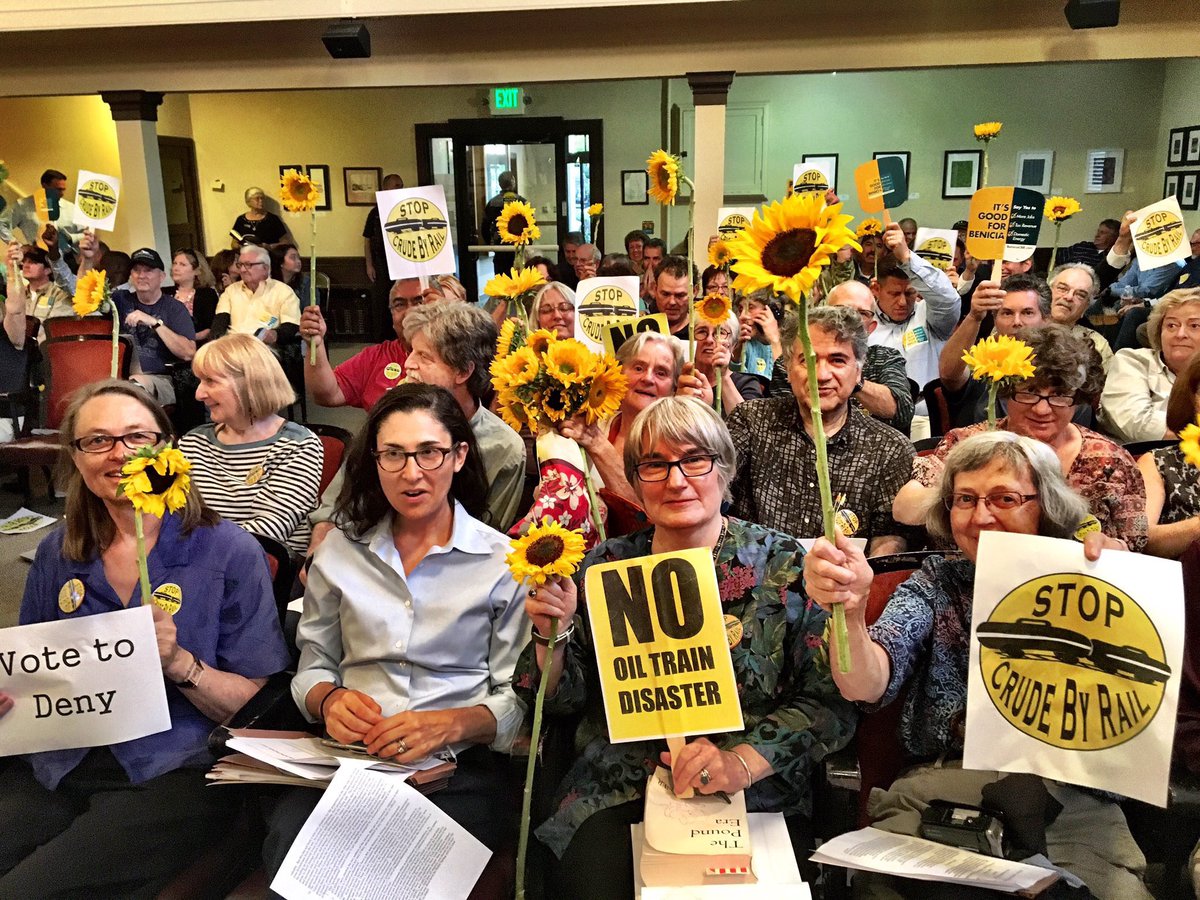 We did it! Opponents of Valero’s oil train proposal gathered in City Hall on the night of Benicia’s historic vote to STOP crude by rail. September 20, 2016. Photo by Emily Jovais.

From the Benicia Independent, by Roger Straw, September 21, 2016

Valero’s dirty and dangerous proposal to bring in Bakken and Tar Sands crude oil on trains from North Dakota and Canada is dead.

Opponents of the proposal worried and wondered for months whether a 3rd swing vote could be found on Benicia’s 5-member City Council.  On Tuesday night, the wondering came to a sudden fairy tale conclusion: a unanimous vote to deny the land use permit and stop the project dead in its “tracks.” 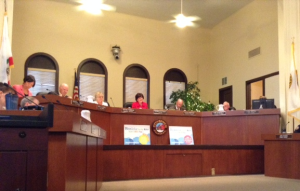 Benicia’s City Council vote follows a February unanimous vote of its Planning Commission vote to deny the project.  Valero appealed the February decision to the Council, then received a six month delay to request backing from the federal Department of Transportation’s Surface Transportation Board (STB).

On Tuesday night, following a motion to deny by Council member Tom Campbell and seconded by Mayor Elizabeth Patterson, Council members Christina Strawbridge, Alan Schwartzman and Mark Hughes all expressed mounting concerns about on-site health, safety and environmental concerns.  City staff was directed to revise it’s resolution to deny the project, and to return for a final vote on October 4. [NOTE: A revised version of the resolution was presented at yesterday’s Council meeting, taking into account yesterday’s STB decision.  The revised version is not yet available in digital format on the City’s website.]

Which brings us to the OTHER SURPRISING, BREAKING NEWS:

Citing arguably similar case law, the STB repeatedly points out that Valero is not a “rail carrier” and that Valero would not be “performing offloading under the auspices of a rail carrier.”

Further, the STB rules that “Valero has not demonstrated that the Planning Commission’s decisions unreasonably interfere with UP’s common carrier operations.”  Under federal law, “accordingly, this situation…does not reflect undue interference with ‘transportation by rail carriers’ within the Board’s jurisdiction.”

The STB ruling also provided guidance on the issue of preemption as it applies to any mitigations and conditions of approval that directly impact rail operations.  The ruling strongly restated federal preemptory powers on any mitigation measures or conditions of approval that would “regulate Union Pacific’s rail operations on its lines.”  But it went on to say, “State and local regulation is permissible where it does not unreasonably interfere with rail transportation….Localities retain their reserved police powers to protect the public health and safety so long as their actions do not discriminate against rail carriers or unreasonably burden interstate commerce. For example, local electrical, plumbing, and fire codes are generally applicable.”

The STB’s guidance continues, “State and local action, however, must not have the effect of foreclosing or unduly restricting the rail carrier’s ability to conduct its operations or otherwise unreasonably burden interstate commerce.”  And finally, “If the offloading facility were eventually to be constructed but the EIR or the land use permit, or both, included mitigation conditions unreasonably interfering with UP’s future operations to the facility, any attempt to enforce such mitigation measures would be preempted…”

The exact definition or meaning of “foreclosing or unduly restricting” and “unreasonably interfering with” was not spelled out in yesterday’s STB ruling.

Valero Benicia Refinery has proposed a project to begin transporting crude oil from North American sources to Benicia by rail tanker cars. The project raises serious questions about the health and safety of Benicians and others up-rail and down-wind. Join with us in opposing this reckless opting for profit over preservation. The future of Benicia, and of the Earth itself, lies in sustainable energy, not in a short term grab for cheap, dirty and dangerously explosive oil from North Dakota and Canada.

PLEASE NOTE: OUR ONLINE PETITION IS CURRENTLY BROKEN.  To sign the Safe Benicia petition, please send an email to info@SafeBenicia.org.  Thanks! [/su_column]

Has someone stolen or vandalized your yard sign?  Read more, and order a replacement here.

Check out our UPCOMING EVENTS page

And check out our MENU above – learn more, get involved, voice your thoughts here on SafeBenicia.org.  Thanks for visiting.

Please help us raise money to organize concerned citizens of Benicia to oppose this dangerous project that Valero is proposing.  We need support with printing flyers, mailers and miscellaneous costs.  Your contribution will make a world of difference to our grassroots organization of Benicia residents. Thank you!!